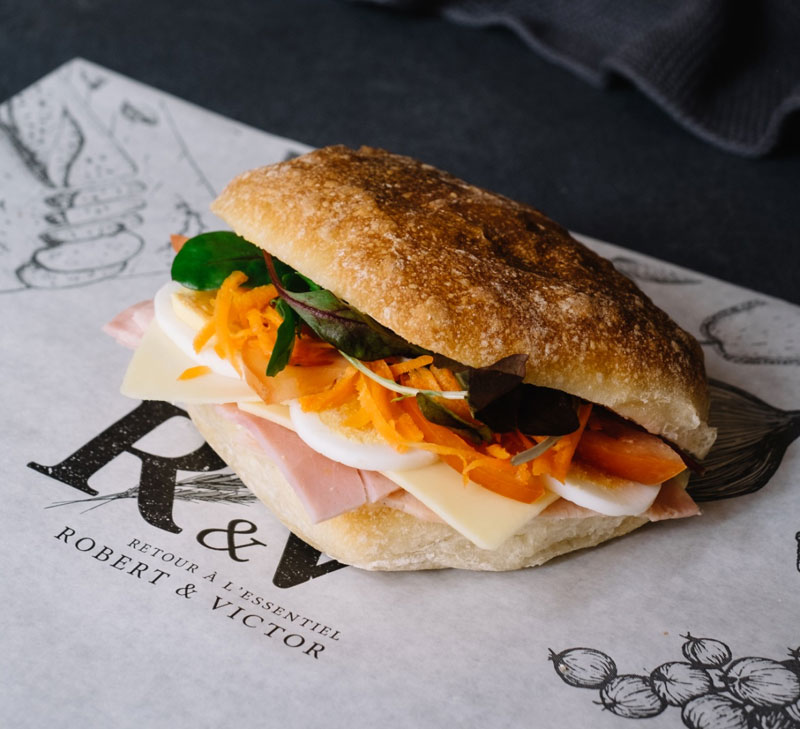 INSIDE THE SANDWICH: CHESHIRE HAM & CHEESE

It’s more traditional in a baguette, but we’re not sticklers for rule – you can have it any way you like.

“Cheshire Ham & Cheese” sounds about as local as a sandwich can possibly get. And while it’s true that most of the ingredients we put in this lunchtime fave come from farms a stone’s throw from our flagship store on Oxford Street, the story of how this iconic sarnie ended up on our menu is a globetrotting adventure spanning four countries. Read on to find out more!

In recent years the UK has been rediscovering its love for the lunchtime sandwich(https://www.theguardian.com/food/2020/jan/08/14-for-a-sandwich-what-are-restaurants-playing-at). The luxury sandwich is on the rise, and people crave the comfort of their classic packed lunch, but with top quality ingredients.

In France, however, there’s no need for such a renaissance. According to a study by Gira Conseil for the European Sandwich and Snack Show (https://www.nouvelobs.com/societe/20090303.OBS7095/en-france-le-jambon-beurre-terrasse-le-hamburger.html#), France is the only country in the world where the sandwich has managed to keep up with the all-consuming power of the hamburger. For each hamburger bought by the French public, eight sandwiches are eaten – and of all the 2.2 million sandwiches eaten in France every single day, nearly half are a single classic recipe: le jambon-beurre.

The recipe takes seconds to explain: half of a good baguette, split in half, spread with real French butter, and a few slices of good cooked ham. It’s simplicity itself, but it speaks to the power of quality ingredients, that defining factor of the francophone lunchtime.

Head north and this sandwich icon evolves. In the French-speaking south of Belgium, the jambon-beurre is upgraded with mayonnaise, cheese, eggs, tomatoes, grated carrots, and lettuce. The name for this jambon-beurre 2.0? Le Dagobert – and its origin may surprise you.

That is, it may surprise you, but only if you’re unaware of the Belgian love of comic books. In the French language, comic books, or bandes-dessinées, are considered le neuvième art – and the list of smash-hit comics to come out of Belgium speaks for itself: The Adventures of Tintin, Asterix, and The Smurfs, just to name a few. Only natural, then, that this typically-Belgian take on the ­jambon-beurre should borrow its moniker from the American comic strip, Blondie. The eponymous Blondie’s wealthy boyfriend, Dagwood, is renowned for eating enormous and elaborate club sandwiches and known in the French-language translation as – you guessed it – Dagobert.

So, a Belgian upgrade of a classic French sandwich, named after an American comic – and made in Manchester. Despite its globetrotting history, our Cheshire Ham & Cheese is a truly local Dagobert. Wherever it’s made, and whether you keep it a simple jambon-beurre or a full-on Dagwood extravaganza, everyone agrees that the key to a good sandwich is top-quality ingredients.

From the pork leg, reared in Cheshire and roasted by the Unsworth brothers in Salford, to the grated carrots from Lancashire’s Blackgate Lane Farm, and the bread fresh from Lovingly Artisan in Kendal, we put nothing in our Cheshire Ham & Cheese that isn’t worthy of the great sandwich. Which means whether you visit us in-store on Oxford Street, or order a boxful to be delivered for your next working lunch, you’re tasting quality.

Become a part of our community!
Registration complete. Please check your email.
Lost your password?

Recover your password
Password reset email has been sent.
The email could not be sent. Possible reason: your host may have disabled the mail function.
Log in
×